Biology Through The Media

Developmental Biology: From Patterning to Pathogenesis (not offered 2021/22)

Signal Transduction to Cancer (not offered 2021/22)

The long-term objective of my research is to investigate the cellular and molecular processes that control annelid development with an emphasis on understanding the evolution of segmental pattern formation. The characterization of developmental regulatory genes in species outside traditional model systems addresses fundamental questions regarding their role in divergent body plans. The emphasis of my research program addresses to what extant important regulatory genes have changed their function in the course of annelid evolution. Currently our lab is characterizing potential segmentation gene homologues obtained from an unbiased subtraction screen completed in polychaetes and leeches (see Annelid Genomics below). Much of what is known about segmentation in annelids comes from studies in the highly derived body plan of the leech. Therefore, concurrent studies in the basal polychaete annelids will help to distinguish general developmental mechanisms from phylum-specific ones, and may show how these processes are modified to account for morphological diversity.

Our lab has produced seven high quality primary and subtraction cDNA libraries from which the Joint Genome Institute (JGI) sequenced ~140,000 ESTs.  In the end, our lab contributed all the ESTs for the Helobdella genome project and the  majority  ESTs for the Capitella genome project.  Microtiter plates are stored at Williams College as a resource for the scientific community.

With the subtraction libraries in hand, we designed an unbiased approach that enriched for gene products expressed during annelid segmentation.  The strategy was simple yet novel.  ESTs collected from subtraction libraries, enriched with cDNAs expressed at the time of segmentation, were compared between annelids (leeches and polychaetes) as opposed to comparing ESTs from other phyla.  The assumption was that the two annelid groups were more likely to share a common mechanism of segmental patterning than any interphyletic comparison.

Our lab has begun to characterize the spatiotemporal expression patterns of annelid homologues to developmental regulatory genes identified from our subtraction libraries. We have initiated an in situ hybridization screen in leech and focused our efforts on key stages of segment formation but prior to overt morphological segmentation for the top 100 segmentation gene candidates.  This screening strategy offers the opportunity to identify  gene products expressed in a molecular reiterated prepattern before overt segmentation is observed ~24 hr later.

In Figure 1 C and D, we have discovered a bilateral punctate mRNA expression pattern that appears shortly after germinal band coalesence (left and right sides of the trunk) and that this bilateral pattern persists until midway through the fusion of the left and rights sides of the trunk.  Once the  the segmented trunk is formed, the bilateral expression pattern is lost which is exactly time period when overt morphological segmentation is first observed.  We are continuing our screen and beginning a series of functional studies to determine the significance of these molecular prepatterns. 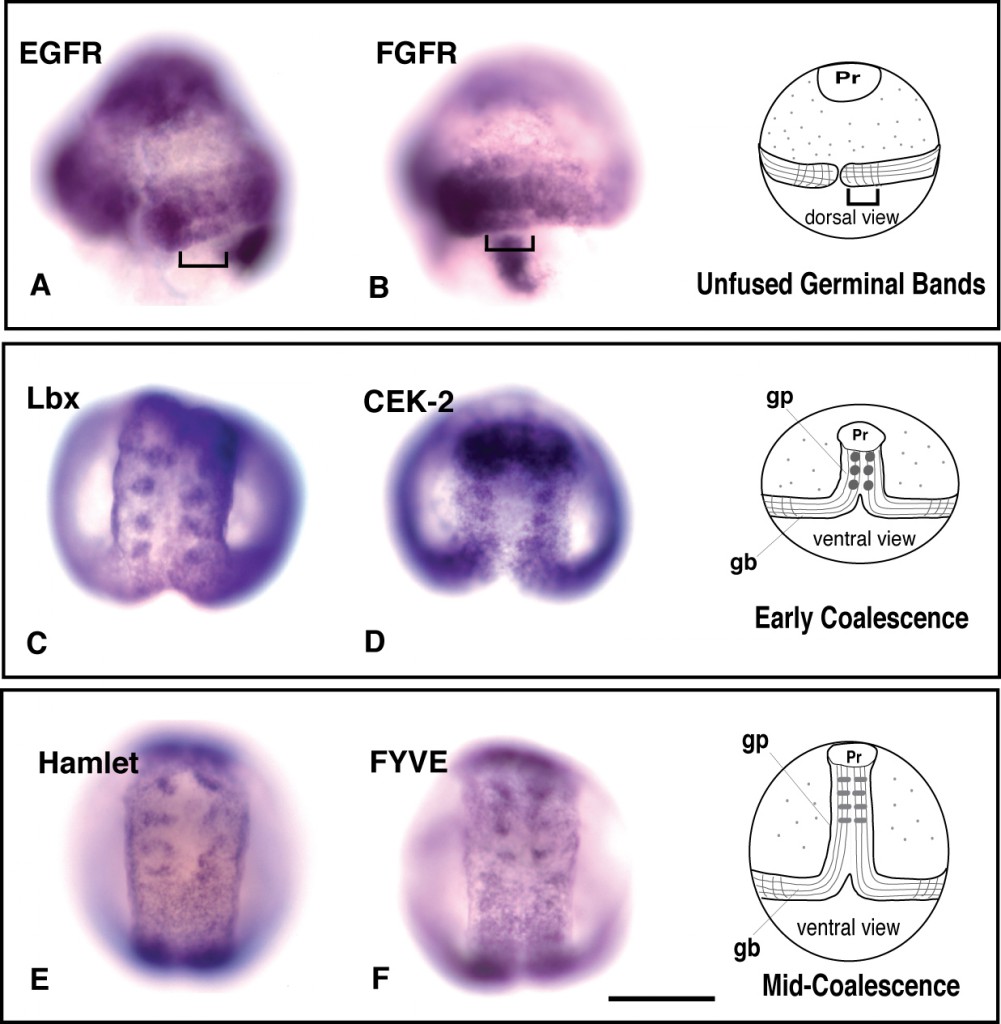 Figure 1.  Whole mount in situ mRNA patterns in three distinct expression domains in stage 8 leech embryos. In the unfused germinal bands domain, Epidermal Growth Factor Receptor (EGFR in A) and Fibroblast Growth Factor Receptor (FGFR in B) mRNAs are expressed in unfused germinal bands (see bracketed area) after they reach the surface and begin to move circumferentially towards the ventral midline.   EGFR and FGFR are two of three gene products expressed prior to coalescence identified from our initial screen.  During the early coalescence domain, ladybird homeobox (Lbx, C) and novel MAPK (CEK-2, D) mRNAs are expressed in a punctate bilateral pattern when the two germinal bands first coalescence.  During the mid-coalescence domain, Hamlet (E) and FYVE zinc finger (F) mRNAs are expressed in stripes in four anterior segments.  The uniform pattern of expression in younger, posterior tissue resolves into stripes in the older, anterior germinal plate. Mid-coalescence stage occurs at least 20 hours before overt morphological segmentation is observed in late stage 8 leech embryos (see Fig 3).  Anterior up, sb 50 um.

The spring semester is underway. See our Covid-19 website for strict health and safety protocols for those who remain on campus. All Williams College buildings are closed to the public and visitors until further notice.